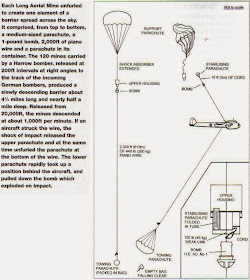 The Harrow served in a novel operational role at the height of the German night Blitz against Britain in the winter of 1940-1941, with six Harrows equipping No. 420 Flight RAF (later to become No. 93 Squadron RAF) which used lone Harrows to tow Long Aerial Mines (LAM) into the path of enemy bombers. The LAM was an explosive charge on the end of a long cable. This unorthodox tactic was credited with the destruction of six German Bombers or 4-5, depending on the source. The experiment was however judged of poor value and the planned deployment of Douglas Havocs in the LAM role cancelled.

The Harrow served in a novel operational role at the height of the German night Blitz against Britain in the winter of 1940-1941, with six Harrows equipping No. 420 Flight RAF (later to become No. 93 Squadron RAF) which used lone Harrows to tow Long Aerial Mines (LAM) into the path of enemy bombers. The LAM was an explosive charge on the end of a long cable. This unorthodox tactic was credited with the destruction of six German Bombers or 4-5, depending on the source. The experiment was however judged of poor value and the planned deployment of Douglas Havocs in the LAM role cancelled.

No. 420 Flight formed on 29th September 1940, under the command of Flt. Lt. Burke for the purpose of experimental work in connection with the use of aerial mines in intercepting enemy planes.  These experiments were carried out with Harrow aircraft using Battle aircraft as targets.  On 26th October, the first practical experiment took place against the enemy, one aircraft being probably destroyed.

On 7th December, 1940 this Flight became No. 93 Squadron under the command of Wing Commander J.W. Homer.  It consisted of 2 Havoc Flights and 1 Wellington Flight. Experiments continued and on 23rd April 1941 the 2 Havoc Flights became operational on night interception duties using mines and the third flight was taken to form the Fighter Experimental Establishment.

During the following months the Squadron flew numerous operational sorties from Middle Wallop with detachments operating at various times from Coltishall, Hibaldston and Exeter.  There is no record of any enemy aircraft destroyed during this period and towards the end of the summer few operational sorties could be made owing to (i) the absence of enemy aircraft and (ii) the presence of friendly aircraft.

At the end of November a decision was taken to discontinue the use of aerial mines in night interception and as a result of this decision No. 93 Squadron was disbanded on 6th December, 1941.

The Long Aerial Mine (LAM)

This entered service towards the end of 1940. The background to this weapon is interesting.   Before the war, tactical papers had often exaggerated the danger to conventional fighters of attacking bomber formations. It was argued that the defensive crossfire from 20 or more bombers in close formation might inflict heavy losses on the interceptors.

Therefore it was important to devise a method of breaking-up bomber formations, to allow the fighters to pick off the bombers individually.   One proposed method was to lay a defensive minefield.   A line of such mines, positioned across the path of an enemy bomber formation, would certainly cause it to break up.

Following much experimentation, the optimum configuration for the mine was determined. The resulting weapon fitted into a cylindrical container 14in long and 7in in diameter, and weighed 141b.   After release from the aircraft the obstacle deployed. It comprised, from top to bottom: a supporting parachute, a length of shock-absorber cord, the cylindrical container, an AAD bomb, 2,000ft of piano wire and, at the bottom, a second furled parachute.

When an aircraft struck the piano wire the shock wave ran up the wire, causing a weak link to break, releasing the main supporting parachute and the cylindrical container. As the container fell away the bomb was armed and a small stabilising parachute connected to the weapon was released.   Simultaneously, the shockwave travelled down the piano wire and caused the lower parachute to open.   This took up a position behind the aircraft and pulled the bomb smartly down on the aircraft.

In the event, the Long Aerial Mine (LAM) was not ready for operations in time for the Battle of Britain.   However, in autumn 1940 Fighter Command's most difficult problem became how to counter the night raider.   The long-term answer was the Bristol Beaufighter fitted with airborne interception (AI) radar, directed on to its prey by a ground-controlled interception (GCI) precision radar.   But each of those systems was in an early state of development, and some time would elapse before they were available in quantity. In the meantime, anything even remotely likely to be effective against the night bombers was pressed into use, including the Long Aerial Mine.   German bombers attacking at night did not fly in formation.   Instead, they approached their targets at irregular intervals, following their radio beams.   At night, the mines were to serve a different purpose than that originally proposed.   Instead of being used to split up an enemy formation, a line of mines would serve as an "aircraft trap" to destroy bombers.

The minelaying task did not require an aircraft with particularly high performance. The machine selected was the obsolete Handley Page Harrow twin-engined bomber. Fully laden, its maximum speed was 170 m.p.h. at 20,000ft, and it took all of 46 min to reach that altitude.   The Harrow was modified to carry 120 Long Aerial Mines weighing nearly 1,7001b.   For night operations the spacing between individual mines was 200ft, so the Harrow's complement would produce a curtain of danger 4½ miles long and 2,000ft deep.   The individual mines descended at about 1,000ft/min, so the curtain remained effective for about 2 min.

In September 1940 No 420 Flight formed at Middle Wallop with modified Harrows. During December the Flight was expanded into 93 Sqn and the new weapon was sent into action.   For these operations the Harrow was guided by ground radar to a release position in front of the raiders.   On the night of December 22, Fit Lt P.L. Burke laid out a line of mines in front of two enemy bombers.   Shortly afterwards one of the radar "blips" seemed suddenly to disappear from the screen, and the bomber was assessed as "probably destroyed".

One of those who flew Harrows with 93 Sqn during the Long Aerial Mine operations was Flt Lt Dennis Hayley-Bell.   He later told the writer:

"One flew alone in the Harrow, which meant that during the long climb to height and the subsequent wait for the enemy one felt rather lonely.   The clumsy Harrow was not an ideal machine to go to war in.   It was very slow and, because there was no heating and the cockpit sealing was often poor, very cold at high altitude.   When the radar controller saw a likely-looking enemy bomber coming in my direction, he would direct me on to an intercept heading to one side and about 1,000ft above the intended victim. At the critical moment I would receive the order to turn sharp left or right, so as to bring me across the path of the victim.   Then I would start the 'Mickey Mouse' the clockwork unit which released the bombs - at the correct time intervals (just under 1 sec) so they were strung out at 200ft intervals behind the aircraft.   It took about 1½min to drop one's complement of mines, then it was just a question of waiting.   If one was very lucky, one might see a flash to indicate that an enemy aircraft had hit one of the wires and dragged down the bomb.   But usually there was nothing to be seen.   The mines were always released some way out to sea, because any coming down on land might cause damage.   During one of the early operations the ground controller failed to make sufficient allowance for the wind, with the result that several mines landed near Bournemouth and the long wires shorted out overhead power lines in the area. Fortunately everyone blamed the resultant power cuts on the Germans, so we escaped any awkward questions."

Hayley-Bell's only successful mining operation was on the evening of March 13, 1941, as German bombers came across the coast to attack Liverpool, Hull and Glasgow. After taking off from Middle Wallop in a Harrow, he climbed to 17,000ft.   Directed by the radar station at Sopley, near Christchurch, he was positioned about four miles ahead of and 3,000ft above an incoming bomber.   At a point 12 miles off the coast near Swanage he was ordered to begin releasing the mines.   After a short wait he saw a small explosion below him, followed by a much larger detonation, powerful enough to shake the Harrow.   Radar operators on the ground observed that the intended victim had missed the minefield, but it appeared that another bomber in the area had picked up a mine.   Hayley-Bell was credited with one enemy aircraft destroyed.

Between March 11 and July 29, 1941, 93 Sqn flew a total of 112 minelaying sorties, and in the course of these its aircraft attempted 59 interceptions.   Of those, only 16 were sufficiently promising to warrant the laying of a minefield.   The outcome was one enemy bomber (Hayley-Bell's) claimed "destroyed" and three more "probably destroyed".

During the summer of 1941 the German night raids tapered off, and by then the Beaufighter was in service in useful numbers.   Compared with that, the Long Aerial Mine gave only a very low probability of a kill, and operations with the weapon ceased in October 1941.
Mitch Williamson at 12:17 PM
Share